Edit
watch 01:36
We're Getting Mutants in the MCU - The Loop
Do you like this video?
Play Sound

Memoir Text Adventure is a text-based RPG flash game that was developed by BlueFlameSkulls and released on October 12, 2009.

Although Flash was discontinued on January 12 2021, Memoir Text Adventure is still playable through BlueMaxima’s Flashpoint.

In Memoir Text Adventure, the player will experience the entire life of a character they create at beginning of the game, who’s name and gender can be chosen but who’s stats are randomly selected. The game is entirely text based and the story takes place in a world similar to ours leading to the player being presented with many relatable scenarios.

After the player chooses their gender and name, they will be presented with the stats that they are starting the game with. These stats include things like intelligence, strength, charm, etc. Each stat can be improved or worsened throughout the game depending on the choices that the player makes and what items they purchase in the shop (unlocked at age 12). 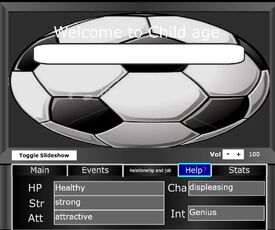 After viewing their starting stats, the player begins the game. The main gameplay loop of memoir text adventure is being presented with a real-life scenario, choosing one of three choices and then see the effects of that choice, whether they be positive or negative. As the player goes through these choices, their character will get older and continue to be presented with events that relate to their characters age group.

If the player makes a choice that would put their health in danger such as entering a fight with a low strength stat or trusting strangers as a child, they may either drop to a very low health level or die, which will end the game. If the player makes the right choices based on their stats, gets a well-paying job (jobs are unlocked at age 17) and spends their money wisely in the shop on life saving items, they are more likely to live to a higher age. The maximum age that can be reached in the game is 130.

The player can also enter relationships throughout the game which are unlocked at age 14. While they don’t play a large part in the game, they do present the player with a few additional scenarios that they otherwise wouldn’t have encountered.

The only controls used in Memoir Text Adventure is the left mouse click, for picking one of the three choices displayed on screen and navigating the additional menus such as the shop, jobs and relationships menus.

Community content is available under CC-BY-SA unless otherwise noted.
Advertisement